Your right, your role – say no to corruption 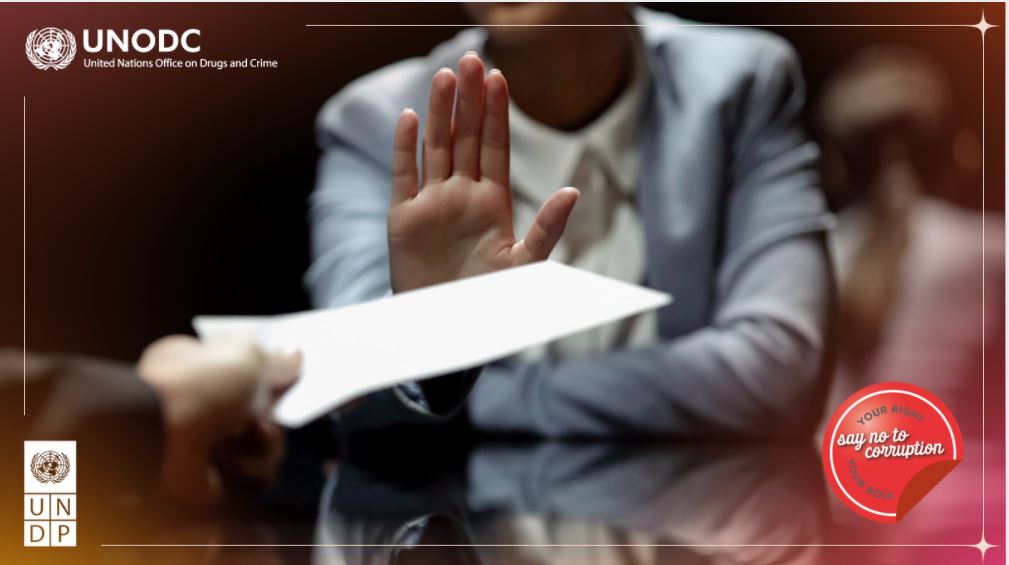 The UNCAC places a premium on the prevention of corruption as a fundamental aspect of criminal justice. It provides for a comprehensive range of preventive anti-corruption measures in a dedicated Chapter (Chapter II) which precedes the Chapter on criminalization and law enforcement. Several provisions of the Convention address the private sector. Among them, Article 12, under Chapter II, calls upon States parties to ensure “…that private enterprises, taking into account their structure and size, have sufficient internal auditing controls to assist in preventing and detecting acts of corruption…”. As such, the prevention of corruption is an obligation for the corporate world too.

The theme of International Anti-Corruption Day 2021 is: “Your right, your role: say no to corruption”. The key message is that a corruption-free word is everybody’s right, and that anti-corruption efforts are everybody’s responsibility – governments, companies, professions, society and individuals alike. The second key message is that policies, laws and mechanisms must be in place, in public and private sectors, for individuals to be able to speak up and say no to this crime without fear of unjustified treatment. An environment where individuals feel free to report wrongdoings, in good faith and on reasonable grounds, contributes to a culture of lawfulness and integrity. It provides a strong deterrent to corrupt practices by those who count on low detection risks if not impunity.

Giovanni Gallo will explain the ongoing role of the UNODC as the “managers” of the UNCAC, their efforts to raise awareness and promote the speak-up culture around reporting corruption and how the Convention addresses the role of the private sector. There will also be a description of a significant integrity initiative developed by the World Bank to establish longer term funding for anti-corruption initiatives. Duncan Smith from the European Investment Bank will then describe anti-corruption efforts from a multi-lateral bank perspective – investigating and sanctioning governments and corporations who engage in corrupt acts in MDB funded projects, and how they can assist in building integrity cultures in the private sector. Finally, Basha Galvin from the Association of Corporate Investigators will explain how the ACi can assist the global fight against corruption through training, education and raising of investigative standards in the corporate world.

The significant impact of corruption on society calls for each of us to play a role in its prevention. Join our high calibre and experienced speakers on International Anti Corruption Day 2021 for this ‘must watch’ webinar. 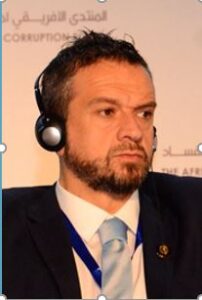 Mr. Giovanni Gallo is the Chief of the Implementation Support Section of the Corruption and Economic Crime Branch at UNODC. He oversees the global delivery of technical assistance for governments to better implement the UN Convention against Corruption. This work includes the engagement of other key actors such as the business community, the academic world and civil society. Over the past 20 years, he held several positions at UNODC, both at headquarters and in the field.

Mr. Gallo is a lawyer by training and holds an advanced law degree from the University of Bologna, Italy. 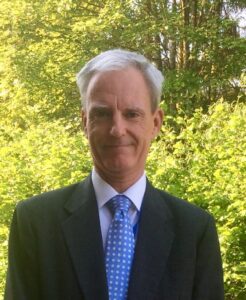 Duncan Smith is Deputy Head of Fraud Investigations at the European Investment Bank. As a barrister, he prosecuted fraud & corruption in the UK. After working for the World Bank’s Investigation Unit (as Team Leader and then policy adviser), he moved to the European Investment Bank to address outreach, training, prevention and deterrence issues. He is a co-author of the International Financial Institution’s Anti-Corruption Uniform Framework Agreement (2006) & other harmonized Multi-lateral Development Bank documents.

Duncan has written articles for the Basel Institute of Governance and the FCPA Blog, for example: The European Investment Bank’s 2020 Fraud Investigation Activity Report is an important compliance resource;

and authored the recently published book: Promoting Integrity in the Work of International Organisations: Minimising Fraud and Corruption in Projects.

Basha started her career with the Metropolitan Police and moved to the City of London Police Fraud Unit, covering money laundering, trade finance fraud, bribery and corruption.  Basha left the police and moved to Citigroup for four years, moving to Barclays plc in 2006 as Head of Investigations & Whistleblowing for Wealth & Investment Bank. In 2018 Basha moved to the Oil & Gas Industry as Head of Investigations for Tullow Oil Plc leaving in late 2020.  Basha is a seasoned financial crime investigator in the public and corporate sector. She has led and managed global investigations teams.  During her career, Basha has had the opportunity to work in a number of jurisdictions including the USA, APAC and EMEA developing investigation models and collating evidence for civil and criminal prosecutions.  Basha was named as one of the “Top 40 in-house” investigation professionals by Global Investigations Review.

Mark has over 35 years of professional investigation experience at both national and international levels within the public sector and private sector. Mark started his career as a counter-terrorism investigator with the Australian Federal Attorney General’s Department. From 1996 to 2008, Mark worked in the Investigations Division of the Office of Internal Oversight Services at the United Nations in New York. Mark joined Siemens in 2008 as the Global Deputy Head of Compliance Investigations and managed the Europe/Middle East/Africa investigation team from the Munich headquarters. In October 2014, Mark was appointed as the Regional Head, Case Handling Asia Australia (within the newly created Legal and Compliance – Regulatory Governance structure in Siemens AG), based in Singapore and with a regional office in Beijing. In August 2019, Mark joined Schneider Electric in Singapore as the East Asia, Japan and Pacific Compliance Officer also responsible for all investigations across the region. Mark returned to Australia in early 2021 and started his own consulting company, Gough Risk Consultancy, based in Queensland. Mark will provide the ACi with advice on corporate investigations management, investigation training (investigations and interviewing), strategic investigation policy identification and drafting, and whistleblower risk management issues.